Pulling back the veil

In Harry Potter, the veil is an arch with a tattered, black curtain that represents a barrier between life and death. It is found in the Department of Mysteries, a secretive branch of the Ministry of Magic which focuses on advanced magical research. In the books, it’s never explained what it is, or how it works. 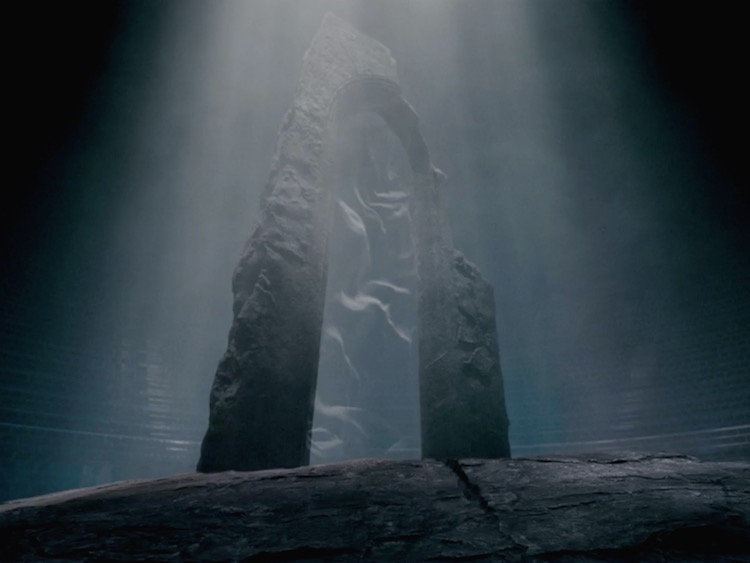 I recently wrote about the veil on the Science Fiction & Fantasy Stack Exchange. I tried to use as much canon information as I could find, but there really isn’t much on the topic.

The questioner wanted to know more about what the Unspeakables might learn from the veil. JK Rowling has said in interview:

The Department of Mysteries is all about studying. They study the mind, the universe, death…

The topic has never been addressed in more detail, but I have some educated guesses. Rather than clutter up the thread with my speculation, I’m posting it here and I’ll link to it in the thread.

This is my take on what the Unspeakables might try to learn from the veil.

This post will contain spoilers for the Harry Potter books. Don’t read beyond this point if you don’t want to be spoiled.

The permanence of death

In the Harry Potter series, it’s taken as fact that death is permanent and irreversible. For example, in this passage from Goblet of Fire:

“Which means,” said Dumbledore slowly, his eyes upon Harry’s face, “that some form of Cedric must have reappeared.”

“No spell can reawaken the dead,” said Dumbledore heavily. “All that would have happened is a kind of reverse echo. A shadow of the living Cedric would have emerged from the wand.”

In Dumbledore’s notes on Babbity Rabbity and her Cackling Stump,1 this fact is repeated:

As the eminent wizarding philosopher Bertrand de Pensées-Profondes writes in his celebrated work A Study into the Possibility of Reversing the Actual and Metaphysical Effects of Natural Death, with Particular Regard to the Reintegration of Essence and Matter: ‘Give it up. It’s never going to happen.’

I think the Unspeakables would want to examine this assumption, and find out whether it really is impossible to bring somebody back from the dead. Are magical folk unable to reverse death because it’s genuinely impossible, or because they haven’t found the answer yet?

One crude experiment is to tie something to a rope, and pass it through the veil. You probably wouldn’t start with a living person, but what about an inanimate object? What happens to a rock that passes through the veil? What about a partially-animate object, like a magical portait? And finally, a living person? All of these are potential ways to learn more about the veil, and the nature of death.

Communicating with the dead

If you discover that resurrection is impossible (or so difficult as to be impractical), then you might want to try talking to them instead. This is a particularly popular idea in Muggle as well as magical culture.

When we first encounter the veil in Order of the Phoenix, both Harry and Luna can hear voices “beyond” the veil.

“Can’t anyone else hear it?” Harry demanded, for the whispering and murmuring was becoming louder; without really meaning to put it there, he found his foot was on the dais.

“I can hear them too,” breathed Luna, joining them around the side of the archway and gazing at the swaying veil. “There are people in there!”

“What do you mean, ‘in there’?” demanded Hermione, jumping down from the bottom step and sounding much angrier than the occasion warranted, “there isn’t any ‘in there’, it’s just an archway, there’s no room for anybody to be there. Harry, stop it, come away—”

Notice that the different characters hear different things. In a 2008 interview with Melissa Anelli, JK Rowling elaborated on the differences:

When they surround that veil [in Order of the Phoenix], I was trying to show that depending on their degree of skepticism or belief about what lay beyond – because Luna, of course, is a very spiritual character. Luna believes firmly in an afterlife. She’s very clear on that. And she feels them speaking or hears them speaking much more clearly than Harry does. This is the idea of faith.

Harry thinks he can hear them; he’s drawn on. But Harry’s had a life that has been so imbued with death that he now has an uncharacteristically strong curiosity about the afterlife, especially for a boy of 15, as he is in Phoenix.

Ron’s just scared, as I think Ron would be – he just knows this is something he doesn’t want to dabble with.

Hermione, hyper-rational Hermione – ‘can’t hear anything, get away from the Veil.’ So if you walk through the veil, you’re dead. You’re dead.

You could explore these differences further (as long as you took appropriate precautions to avoid people walking straight through). They do a similar thing in the Love Chamber: exploring the effect it has on different people.

If you could find a particularly spiritual person like Luna, then you could listen to and interpret the whispers. (Being on the run from a pack of Death Eaters, Harry and co. don’t have time to stop and listen.) Maybe that opens a route of communication.

The Resurrection Stone and the Priori Incantatem effect in Goblet of Fire both provide evidence that this sort of magic is possible. If the Unspeakables could witness either of these first hand, then they could study them and try to replicate the effect.

If they can’t witness them directly, then the veil seems like a natural starting point for alternative investigations.

Another aspect of death in the series is the idea of an “afterlife”. Ghosts are the most obvious example of this, but there are other hints throughout the books. The Unspeakables would want to know what form this “afterlife” takes, and how it fits into the universe as a whole.

Part of this can be learnt from interviewing the dead, but it would be preferable to study it directly. Since the veil is a barrier between life and death, this would make it a focal point of study, as the Unspeakables try to learn what goes on “behind it”. A crude experiment would be to reach forward and just pull it back with your hand, but I imagine that wouldn’t end well. You can imagine a whole class of spells being developed for seeing through the veil.

You could also ask whether it’s possible for a living person to visit the afterlife, without actually being dead. The veil might give you a starting point for trying.

As well as an afterlife, we see a “limbo” state in the books. In Chapter 35 of Deathly Hallows, Harry and Dumbledore have a conversation in limbo, which appears to Harry in the form of King’s Cross Station. This was confirmed as limbo in a 2007 interview with JK Rowling:

In the chapter of King’s Cross, are they behind the veil or in some world between the real world and the veil?

JKR: You can make up your own mind on this, but I think that Harry entered a kind of limbo between life and death.

The same phrase was used in a question on her old website.

What makes this interaction particularly unusual is that Harry seems to have a choice about where he goes next:

“Oh yes.” Dumbledore smiled at him. “We are in King’s Cross, you say? I think that if you decided not to go back, you would be able to… let’s say… board a train.”

“And where would it take me?”

He’s just been struck with Avada Kedavra, the killing curse, so by rights he should be dead. Yet here we have an instance where death can be reversed, and doing so is the individual’s choice.

This sort of event would be incredibly difficult, probably impossible, to reproduce. But I imagine the Unspeakables try to replicate them, and study their effects. Does the veil take you to the afterlife via limbo, or do you die immediately?

All of the questions I’ve posed above can be found in real-world academia. We know of at least six other rooms in the Department of Mysteries, each corresponding to different mysteries of life.

If you want to know what the Unspeakables get up to elsewhere, then I’d suggest looking at the major problems of science and philosophy.