Over the weekend, I’ve been trying to clear some disk space on my Mac. I’ve been steadily accumulating lots of old and out-of-date files, and I just wanted a bit of a spring clean. Partly to get back that the disk space, partly so I didn’t have to worry about important information files that might be getting lost in the noise.

Over the course of a few hours, I was able to clean up over half a terabyte of old files. This wasn’t just trawling through the Finder by hand – I had a couple of tools and apps to help me do this – and I thought it would be worth writing down what I used.

Embarking on an exercise like this without good backups would be foolhardy: what if you get cold feet, or accidentally delete a critical file? Luckily, I already have three layers of backup:

The Time Machine backups go back to last October, the CrashPlan copies further still. I haven’t looked at the vast majority of what I deleted in months (some stuff years), so I don’t think I’ll miss it – but if I change my mind, I’ve got a way out.

For finding the big folders: DaisyDisk

DaisyDisk can analyse a drive or directory, and it presents you with a pie chart like diagram showing which folders are taking up the most space. You can drill down into the pie segments to see the contents of each folder. For example, this shows the contents of my home directory: 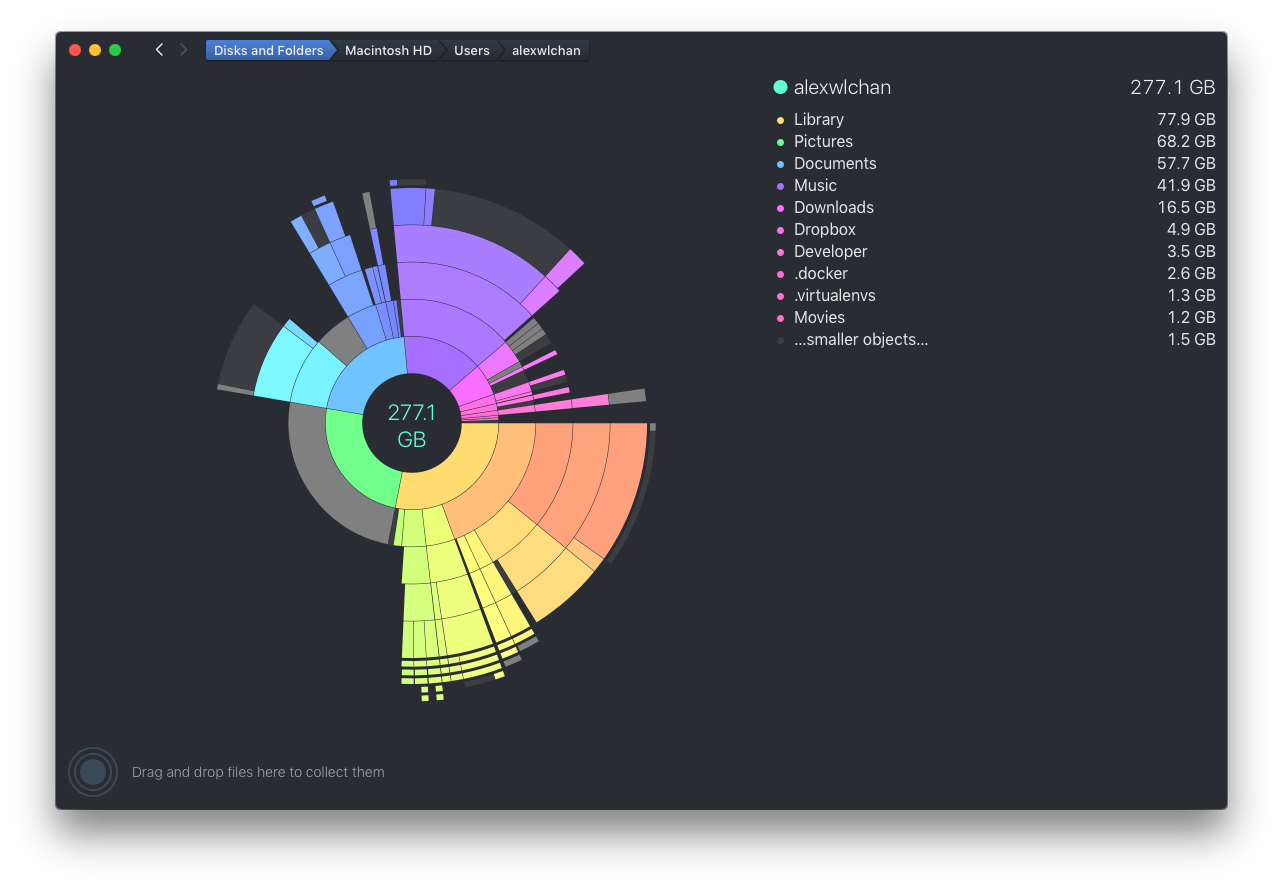 This is really helpful for making big space savings – it’s easy to see which folders have become bloated, and target my cleaning accordingly. If you want quick gains, this is a great app.

Once I’ve found a large directory, I need to decide what (if anything) I want to delete. Sometimes I can look for big files that I know I don’t want any more, and move them straight to the Trash. But the biggest waste of space on my computer is multiple copies of the same file. Whenever I reorganise my hard drive, files get copied around, and I don’t always clean them up.

Gemini is a tool that can find duplicate files or folders within a given set of directories. For example, running it over a selection of my virtualenvs: 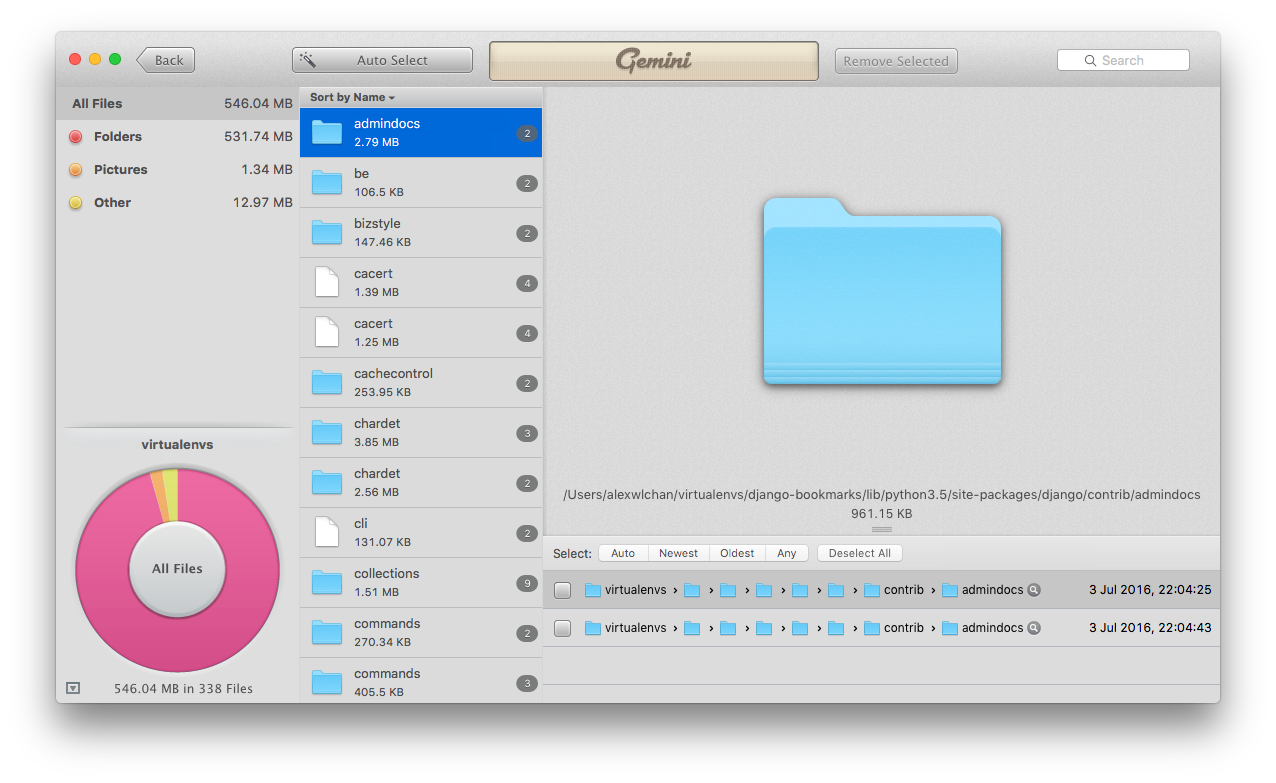 Once it’s found the duplicates, you can send files straight to the Trash from within the app. It has some handy filters for choosing which dupes to drop – oldest, newest, from within a specific directory – so doing so is pretty quick.

This is another fast way to reclaim space: deleting dupes saves space, but doesn’t lose any information.

Gemini isn’t perfect: it gets slow when scanning large directories (100k+ files), and sometimes it would miss duplicates. I often had to run it several times before it had found out all of the dupes in a directory. Note that I’m only running v1: these problems may be fixed in the new version.

Sometimes I wanted to compare a couple of individual files, not an entire directory. For this, I turned to Python’s filecmp module. This module contains a number of functions for comparing files and directories. This let me write a shell function for doing the comparisons on the command-line (this is the fish shell):

Fish drops in the two arguments to the function as $argv[1] and $argv[2]. The -c flag tells Python to run a command passed in as a string, and then it’s printing the result of calling filecmp.cmp() with the two files – True if they match, False if they don’t.

Usage is as follows:

I have this in my fish config file, so it’s available in any Terminal window. If you drag a file from the Finder to the Terminal, it auto-inserts the full path to that file, so it’s really easy to do comparisons – I type filecmp, and then drag in the two files I want to compare.

This is great if I only want to compare a few files at a time. I didn’t use it much on the big clean, but I’m sure it’ll be useful in the future.

Part of this exercise was trying to consolidate my photo library. I’ve tried a lot of tools for organising my photos – iPhoto, Aperture, Lightroom, a folder hierarchy – and so photos are scattered across my disk. I’ve settled on using iCloud Photo Library for now, but I still had directories with photos that I hadn’t imported.

When I found a directory with new pictures, I just loaded everything into Photos. It was faster than cherry-picking the photos I already didn’t have, and ensures I didn’t miss anything – but of course, it also ensures that I import any duplicates.

Once I’d finished importing photos from the far corners of my disk, I was able to use this app to find duplicates in my photo library, and throw them away. It scans your entire Photo Library (it can do iPhoto and Photo Booth as well), and moves any duplicates to a dedicated album, for you to review/delete at will.

I chose the app by searching the Mac App Store; there are plenty of similar apps, and I don’t know how this one compares. I don’t have anything to particularly recommend it compared to other options, but it found legitimate duplicates, so it’s fine for my purposes.

There were a couple of other command-line utilities that I find useful.

If I wanted to find out which directories contain the most files – not necessarily the most space – I could use find. This isn’t about saving disk space, it’s about reducing the sheer number of unsorted files I keep. There were two commands I kept using:

These two commands let me focus on processing directories that had a lot of files. It’s nice to clear away a large chunk of these unsorted files, so that I don’t have to worry about what they might contain.

And when I’m using Linux, I can mimic the functions of DaisyDisk with df and du. The df (display free space) command lets you see how much space is free on each of my disk partitions:

And du (display disk usage) lets me see what’s using up space in a single directory:

I far prefer DaisyDisk when I’m on the Mac, but it’s nice to have these tools in my back pocket.

These days, disk space is cheap (and even large SSDs are fairly affordable). So I don’t need to do this: I wasn’t running out of space, and it would be easy to get more if I was. But it’s useful for clearing the noise, and finding old files that have been lost in the bowels of my hard drive.

I do a really big cleanup about once a year, and having these tools always makes me much faster. If you ever need to clear large amounts of disk space, I’d recommend any of them.