This YAML file will self-destruct in five seconds!

If you know the Mission: Impossible films (or before that, the 1966 TV series), you’ve surely heard the famous phrase, “This tape will self-destruct in five seconds. Good luck, Jim.” As soon as our hero hears his instructions, the tape emits a cloud of smoke and is rendered useless.

But would this work in 2019? Modern spies don’t use analogue recorders and reel-to-reel tape, they use computers and digital files. Could we equip them with a message that would self-destruct as soon as they read it? The answer: yes, but you really shouldn’t. 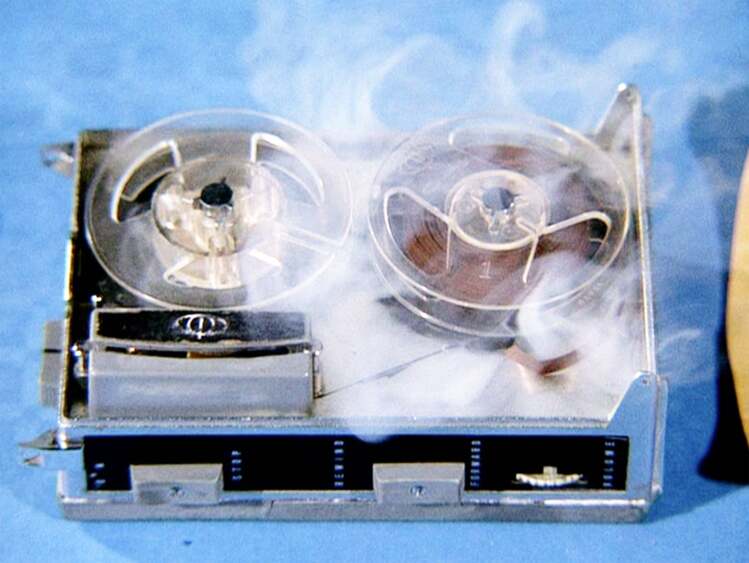 It’s easy to create an executable file that destroys itself as soon as it runs. The challenge is to do it in a format that looks innocuous – at a casual glance, it looks like a plain text file, with no trickery or traps.

Let’s talk about YAML, which is a language for serialising data. You can use it to store data structures like lists, maps, and text – similar to JSON or XML – and it’s often used for config files and the like. It’s meant to be human-readable, which is why it’s so popular for storing config. Here’s a small example:

The basic YAML syntax allows you to specify simple data structures (lists, maps, and so on), but what if you want to serialise something more complicated?

You can also have language-specific tags. If you run this through a Python YAML parser, it creates a Python tuple instead of a list:

To do this, your parser needs to be executing arbitrary code, and that’s always a recipe for security vulnerabilities. If you trust your YAML, this is less of an issue – but if you’re parsing YAML from unknown sources, this could be used to run malicious code on your machine.

For a long time, the default load() function in the PyYAML module was unsafe, and would run any Python code in the YAML it received. This meant you could call system functions from YAML:

There was a safe_load() function that would only load a subset of YAML that didn’t feature arbitrary code execution, but it wasn’t until earlier this year that safe loading became the default.

Ever since I learnt about this behaviour, I’ve idly wondered if you could use this to cause the YAML file to delete itself, and yesterday I got that working. This is shocking, disgusting code, and you shouldn’t use it in practice – but it proves the idea.

Using os.system is powerful, but the builtin exec() function is even more powerful. If you pass this a string, it tries to execute the string as Python code. Always be careful when using this function, and never call it with untrusted input.

If you pass this to yaml.load() with a vulnerable version of PyYAML (< 5.1), it prints the text Hello Mr Phelps. – but we could do anything we like here.

We could, say, look up the ID of the parent process (the Python interpreter that’s doing the parsing), and then use lsof to see what files that process has open:

And if we can see what files a process has open, well, we could see what YAML file it has open for parsing, and delete it. I tried to write something like this:

but you get errors from the YAML parser – the square brackets, quotes, and commas look like they might be part of the YAML syntax, and the parser gets confused.

I hit this problem a couple of times, and I tried to be clever and write my Python code to avoid any of those characters, but it severely limits what you can do. (Among other things, no commas means you can’t call functions with more than one argument.)

We can get round this by doubling down on a bad idea. If you want to get a string through an environment that only allows a limited set of characters, you can often use base64 encoding. This encodes your text in a form that only uses alphanumeric characters, plus three punctuation characters (+, /, and =). If we put base64 encoded source in the YAML file, decode it at runtime, then call exec() a second time – that would get past the YAML parser.

And if we do this to the code I was trying to run above, here’s the message we end up with:

then he sees our message, and then the file will burst into (metaphorical) smoke before his eyes!

This code is dastardly, terrible, and nobody should use it. It abuses unsafe YAML loading and the exec() function, neither of which should ever be used with untrusted input – or ideally at all. It’s also quite fragile; lsof behaves differently across platforms, and this likely won’t work on macOS or Windows.

Please don’t use this for anything serious. If it explodes, I will disavow any knowledge of your code.