Drawing coloured squares/text in my terminal with Python

Last night, I posted a tweet wondering about the different colours of the “spool of thread” emoji, and I made an illustration to show the variety: 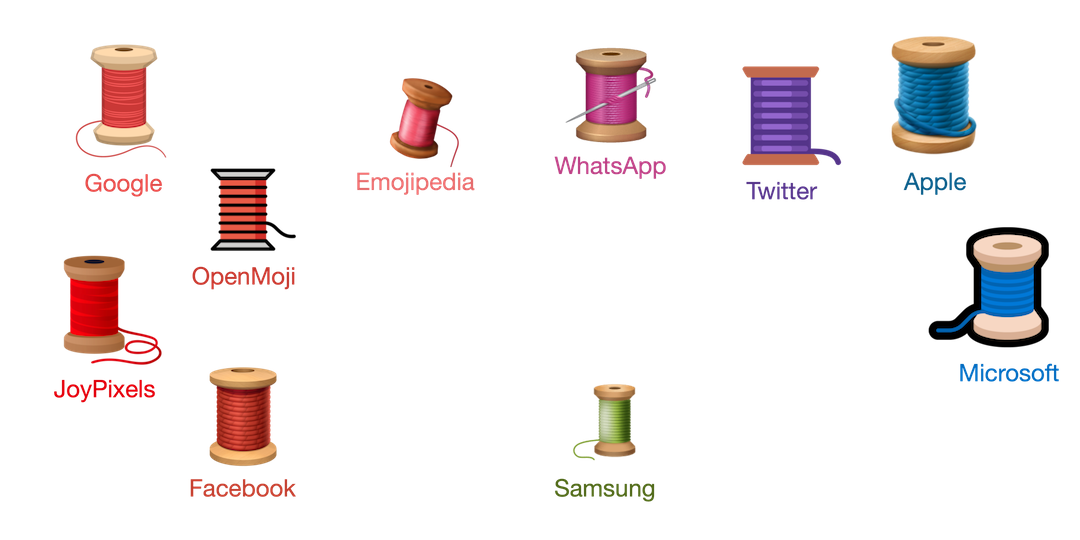 The emoji icons are from Emojipedia, and I’ve labelled each one with the name of the platform it comes from. Notice that I’ve colour-matched each label to the emoji, and it’s a different colour for each label – how did I pick the colours?

I already have code to extract dominant colours from images, using k‑means clustering. I was able to use the script from the end of that post to get a list of suggestions:

Problem is, I can’t visualise colours from their hex codes. Which colour is the murky brown, and which is the vibrant pink? Wouldn’t it be nicer if I could see the colours?

I found a Perl function that prints coloured blocks to the terminal using ANSI escape codes. I rewrote it in Python, and then I could see the hex code and the colour it represented:

The function returns a string that prints a single coloured square, which you can use and print like any other string. This won’t work in every terminal app, but it works in the one I use (iTerm2), and that’s good enough for my needs.

I don’t fully understand ANSI escape codes, but reading the Wikipedia entry while writing this post helped me understand what’s going on. The \033[…m marks the escape code, and 48:2::r:g:b sets the background colour of the terminal. Typing a single space draws the square of colour, and then 49 restores the default background colour.

Scrolling up on that page, I see that 38:2::r:g:b lets you set the foreground colour, and that lets me write another interesting function:

Notice that the result now ends 39 to restore the default foreground colour, not 49. I got that wrong on my first attempt!

Combine this with something like Unicode block elements, and this could be a very powerful tool. For example, I can use a lower seven-eights block to add a gap between squares, and colour the hex swatches to match:

This is even more useful – it makes it visually obvious that, for example, the last colour would be unsuitable for text on a white background.

All this might seem like overkill for a throwaway tweet, but I’m bound to use it in other places. Now I’ve done this, I have two functions that I can drop into any project that involves colours – and unlike a library, I completely understand how they work. Writing blog post was a key part of that understanding – by explaining it to you, I first have to explain it to myself.

Being able to see colours in my terminal has been a “wouldn’t it be nice if” debugging idea for a while, but I’ve never got round to it before. Now I have, it’s a single copy/paste to start reaping the benefits, so I’m much more likely to do it – and maybe you will too.