You should take more screenshots

I’ve been using computers for about two decades. I still have some of my oldest files; the earliest I can definitively date are from 2003, but I’m sure they aren’t the first things I made on a computer.

Digital work is inherently ephemeral. One of the reasons I enjoy handcrafts and handwriting is that the physical objects serve as a permanent reminder of my past creativity. As more and more of my life moves online, I want to remember my digital projects as much as my physical ones.

In theory, this is easy: I have a hard drive full of files from old projects.

In practice, it’s quite tricky. Having files is one thing; being able to use them is quite another.

For example, my oldest files were made in Microsoft Word on an iMac G3 running Mac OS 9. I can open them in a modern word processor, and they look similar – but it’s not the same. Some of the fonts and graphics are missing, and I don’t know where I’d find replacements.

Working on software projects makes this even harder. I might have the code, but that doesn’t mean I can do anything useful with it. Getting a well-documented, modern software project up and running is hard enough. It’s even harder for an undocumented side project I abandoned years ago. Having the code isn’t the same as a working application.

Digital files exist in a context: they rely on particular hardware and software to be useful. The more time passes, the harder a context is to replicate. It is possible to emulate older systems, but it’s requires a lot of time and expertise; more than I’m going to spend for the sake of nostalgia.

So as well as files, I save the next best thing: screenshots. I have dozens and dozens of screenshots of things I’ve made (and a handful of screen recordings, too). They’re a sort of “visual journal” of fun, silly and interesting things I’ve done on my computer. Here’s just a handful: 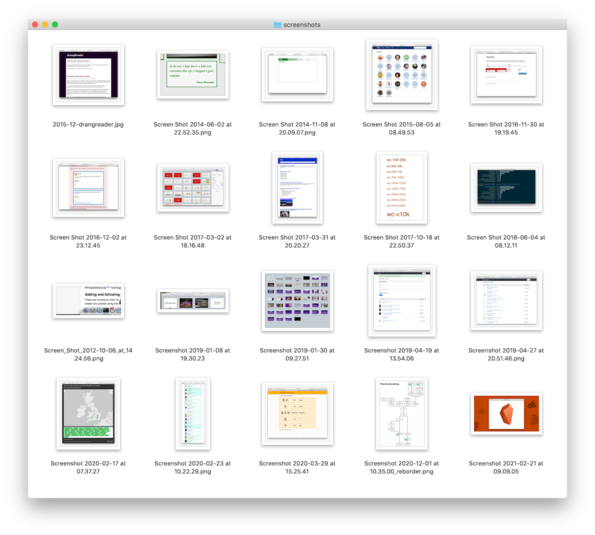 Each of these images tells a story of something I made. They’re not as good as having the original, working thing – but they’re much better than nothing. I can dip in quickly and easily, and instantly be reminded of the creativity of my past self.

The best time to take these screenshots is as I’m doing the work – when I have all the required context. And unlike the raw files, images are a stable format that I’ll be able to read for a very long time. I don’t need any context to look at an image; I just look at it in an image viewer.

If you do digital creative work, you probably make things you’re proud of or that you’d like to remember. Screenshots are a great way to do that.