Our Place in Space

Yesterday afternoon, after a tip from Margaret Middleton, a friend and I went to Cambridge to walk along the Our Place in Space sculpture trail, which is a scale model of the solar system meant to show off its sheer size. It’s a rather charming 5-mile walk through some lovely countryside, that made us both realise “gosh, space is big”.

At the start of the trail is a large globe, where each country is labelled “us” and “them”. Apparently the words light up alternately – but we couldn’t see that in bright sunlight. Regardless, it’s a nice, subtle message: 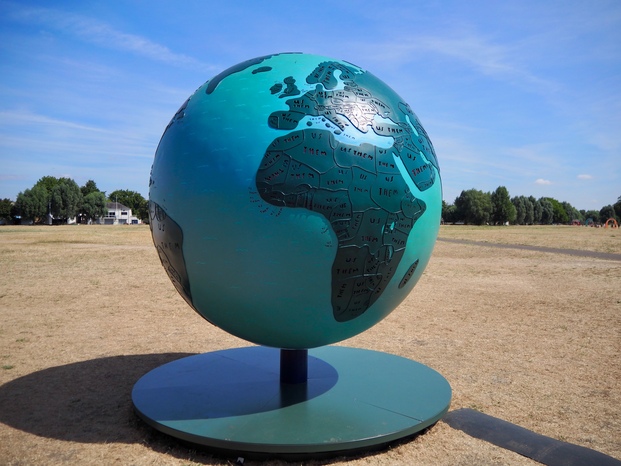 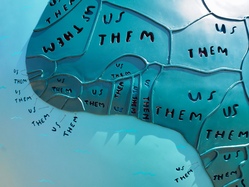 There’s also a terrifying vision of our urban future, in which abandoned rockets have joined e-scooters in littering our streets. (It’s actually a place for kids to take photos, but who’s counting?) 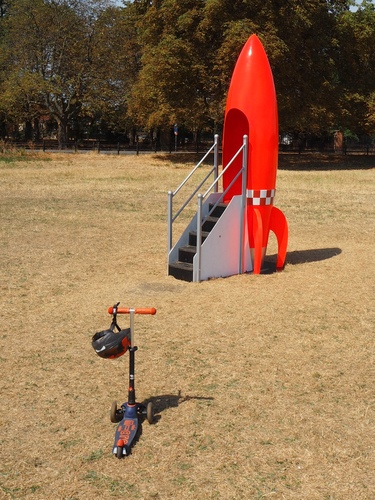 The trail starts at the Sun, a large globe that is the source of all life and energy on Earth. It was making a slight buzzing noise, no doubt the sound of intense fusion processes taking place inside. (Or some interior lights, which were unfortunately invisible against the light of the real thing.)

At first, the solar system seems pretty small: you can see the first four planets before you leave the Sun, stretching less than half a kilometre across Midsommer Common. Light from the Sun reaches Mars in about eleven minutes; we covered it in less than half that.

(We did wonder if the trail is designed so that children – who have shorter legs and likely walk slower – cross the solar system at the speed of light. Even if it’s not intentional, it’s not far off.)

At each stop is a scale model of the planet (usually no bigger than a marble), and a brightly coloured archway to help you find it. The planets are tiny; without the archways you’d never find them. I got an idea for how difficult it must have been for early astronomers to pick out planets from the sky.

I was particularly tickled by how the model of Earth has a light side and a dark side, and that Cambridge itself was on the light side. 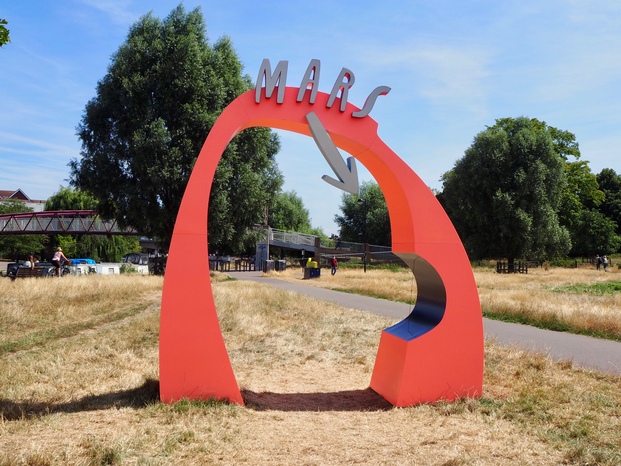 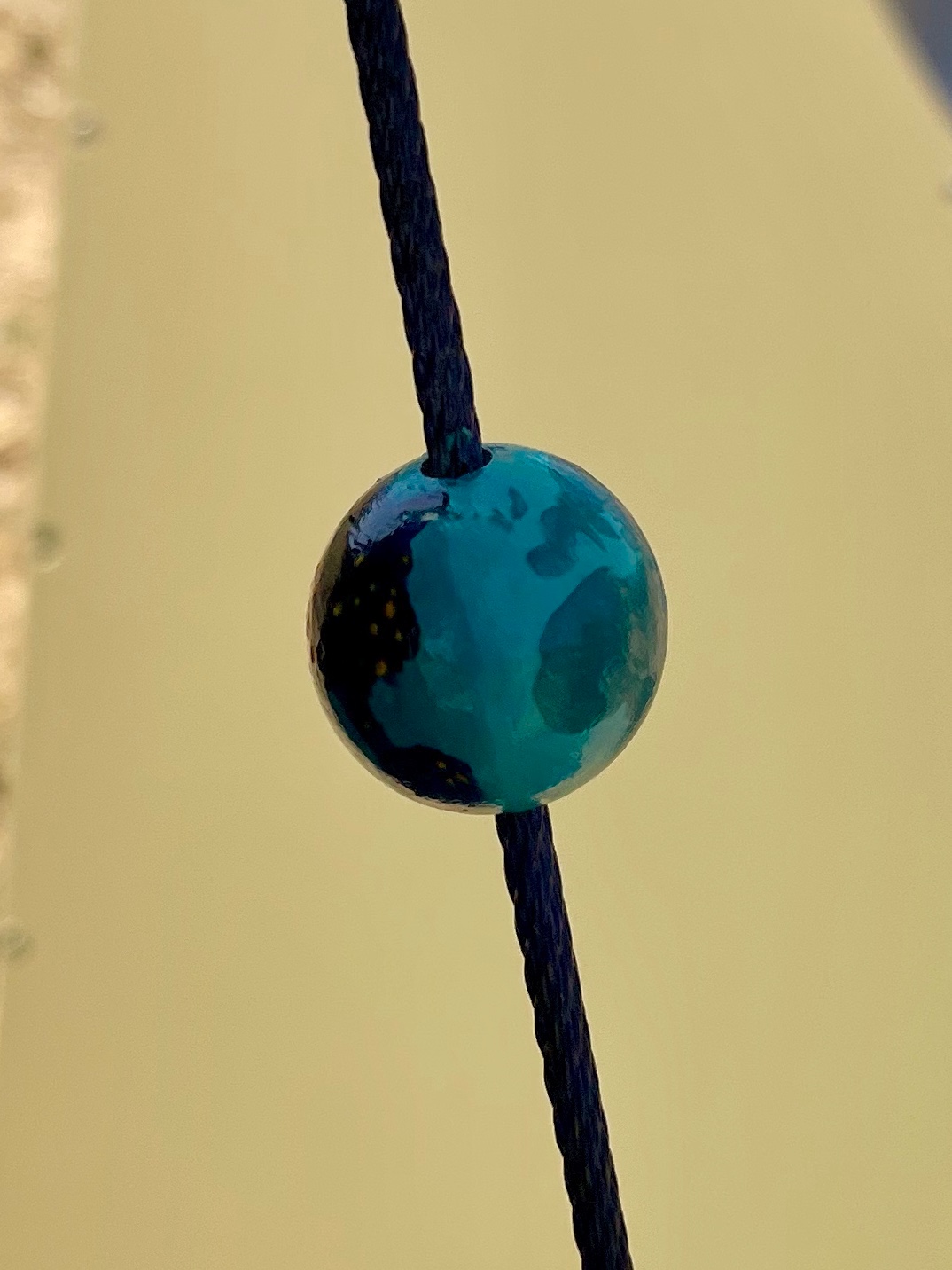 After Mars the planets start to really space out, and more than once I wondered aloud if we’d gotten lost and were drifting off into the uncharted wilderness of northeast Cambridge deep space. Fortunately, there were signs at various points to tell us to keep going, that we were indeed heading along the right path.

We found Jupiter on the edge of Stourbridge Common, along with my favourite planet model: 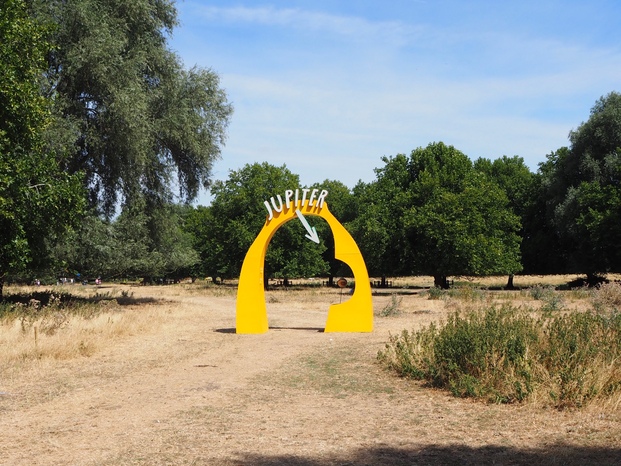 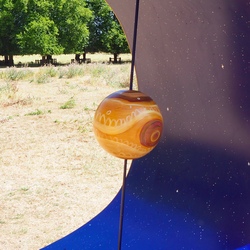 As a sidebar: just before Jupiter, you can turn off to pick up refreshments at the Newmarket Road Tesco, where I used to shop regularly. It’s the last good stopping point before Waterbeach, and I wish I’d picked up more water. It’s also the last proper bathroom for a while.

It was a hot day, I was carrying a full litre bottle, and I drank all of it – and I’d have happily drunk more. Next week is going to be even hotter, so if you take the walk, pack accordingly.

My thirst aside, the walk from Jupiter to Saturn is a very pleasant journey along a riverside path. It’s a quiet, tranquil route that’s well worth the time, sculpture trail or not. (You’ll have to take my word for it, because I put my camera away to chat to my friend.)

I forgot to take a proper picture at Saturn because we stopped to give somebody directions; what I did notice is that it’s shown as blue. I’m used to seeing Saturn as a caramel colour with dark brown rings; I don’t know why this depiction was different. 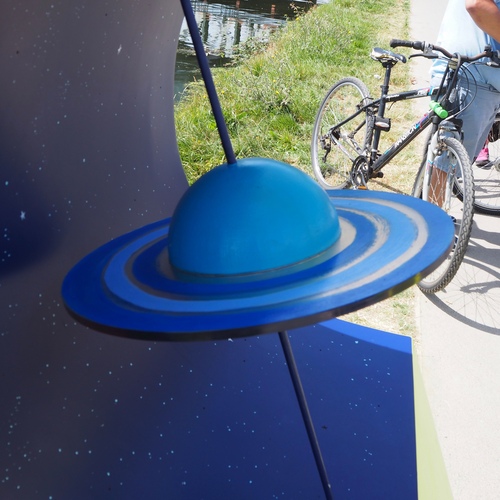 The walk to Uranus takes you firmly into the countryside, and it stands out nicely when it comes into view. It’s also a very pleasing shade of blue. 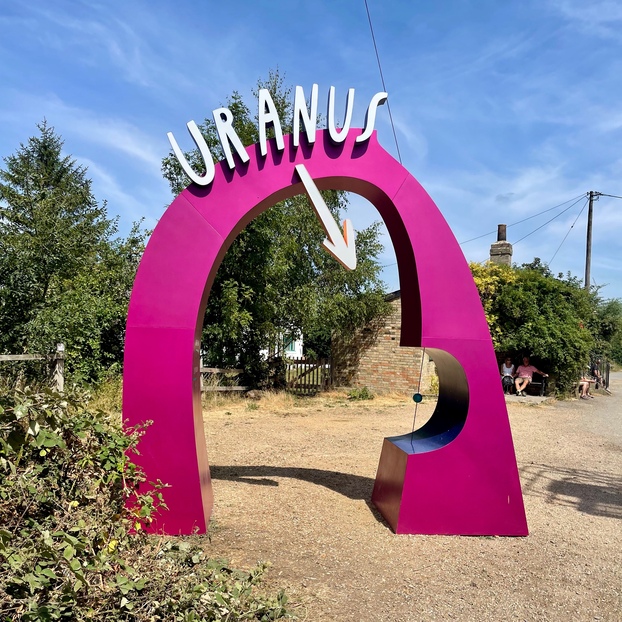 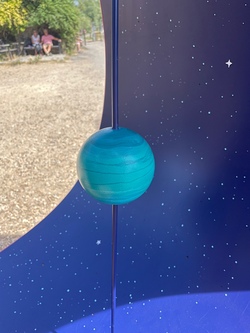 It was also a bit daunting to realise we’d have to walk as far as we’d walked from Saturn again to get to the next planet (~2.5km). The outer solar system really is sparse.

We found Neptune in a leafy grove, where we sat on a bench and nibbled snacks. 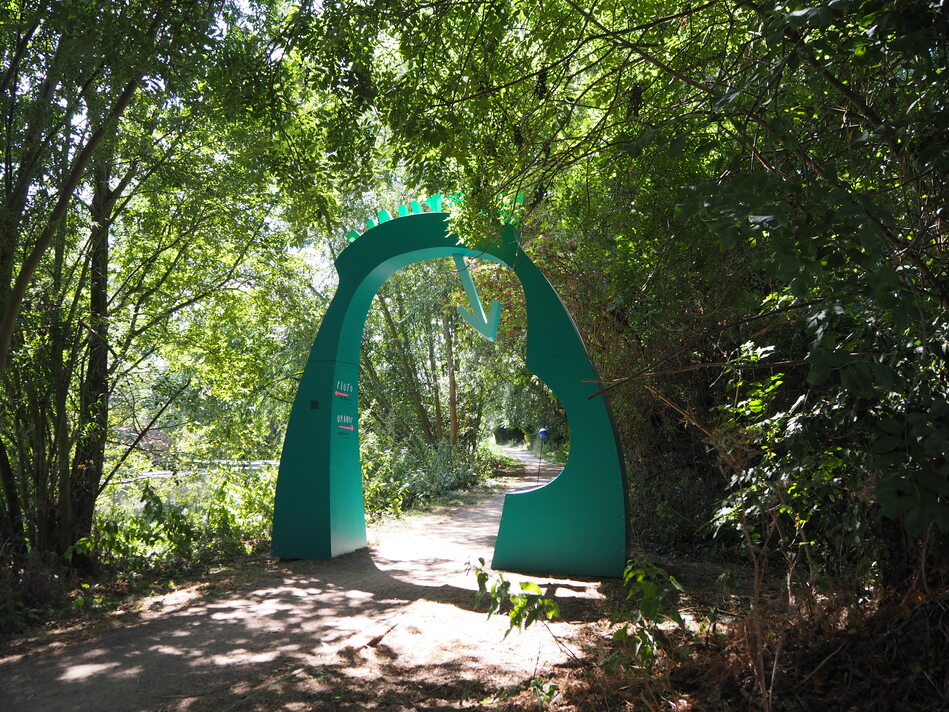 It was quite a relief to have just a short walk to Pluto, which is absolutely titchy. 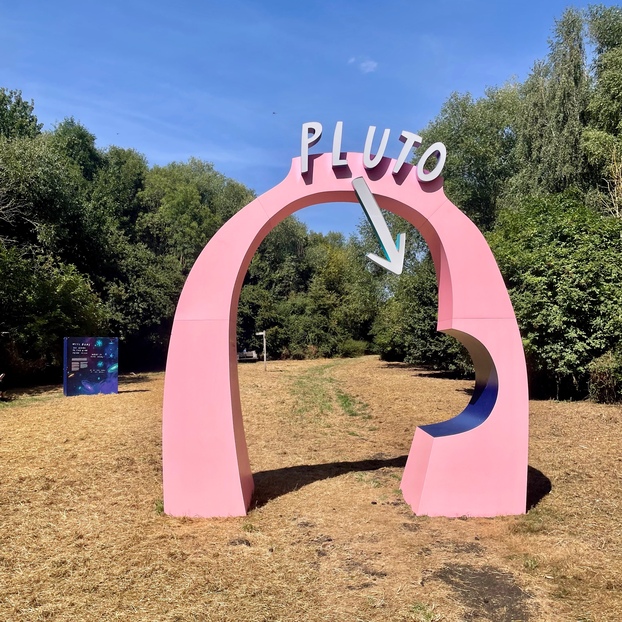 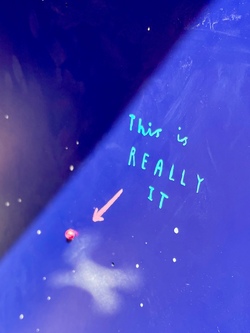 From there, we walked a bit further to Waterbeach Station, where we were able to catch a train home. It’s a very nice trail, and hard not to feel the size of the solar system with every extra step we took. I sort of knew intellectually that solar system diagrams weren’t to scale, but I didn’t realise quite how disproportionate it was until I walked it.

At the end of the walk, it was hard not to remember the “us/them” message from the start, and compare that to the parched grass along the trail. It was a nice walk, but it would have been nicer to walk along lush, green grass – not straw that’s been roasted by extreme heatwaves.

If you’re in Cambridge in the next two weeks and you fancy a nice walk (or bike ride), I recommend it; there are a bunch of fun details I didn’t include here. You can find timings and a map on the website. After that, it’s heading back to County Down for its final outing.

There’s also a smartphone AR app to use along the trail, and a programme of accompanying events – I missed all of those, but you may want to check them out too.

I think I still don’t really get how big space is – billions of kilometres are just too much for my brain to understand – but I do have a better sense of how empty the solar system really is, and how tiny Earth is within it. At that scale, a lot of our squabbles and struggles seem very small.