One-step paste in the iOS Simulator

On the latest episode of The Talk Show, John Gruber lamented the two-step paste process into the iOS Simulator (about fifteen minutes in). It goes like this:

Having to paste twice is mildly annoying, but it’s easy to fix. I have a Keyboard Maestro macro that lets me paste directly into the copy of iOS running in the Simulator.

The macro itself is very simple: 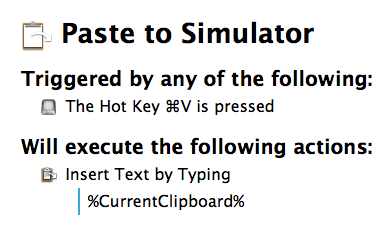 It’s just a tweaked version of Gabe Weatherhead’s Paste as Typed Text macro, which is useful for pasting passwords into fields where pasting is disabled. I have it inside a macro group, which is configured to only be enabled in the iOS Simulator.

There are a few other notes: