Tiling the plane with Pillow

On a recent yak-shaving exercise, I’ve been playing with Pillow, an imaging library for Python. I’ve been creating some simple graphics: a task for which I usually use PGF or TikZ, but those both require LaTeX. In this case, I didn’t have a pre-existing LaTeX installation, so I took the opportunity to try Pillow, which is just a single pip install.1

It was a pleasant surprise to learn that Pythonista includes Pillow, so I could work on this code while walking to work.

There are just three regular tilings of the plane: with squares, equilateral triangles, and regular hexagons. Here’s what they look like, courtesy of Wikipedia:

In this post, I’ll explain how I reproduced this effect with Pillow. This is a stepping stone for something bigger, which I’ll write about in a separate post.

If you just want the code, it’s all in a script you can download.

To do any drawing, first we need to establish a coordinate system.

The usual (x, y) coordinate system has two perpendicular axes. There’s an origin at (0, 0), and values increase as you move bottom-to-top, left-to-right.

In Pillow, this is flipped vertically: an increase in the vertical axis means moving down, not up. The origin is the top left-hand corner of an image, and the image canvas sits below and to the right. 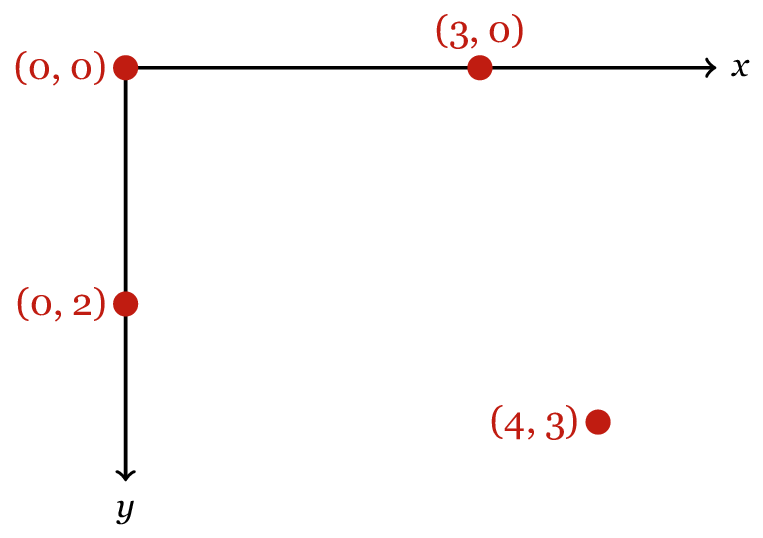 Practically speaking, this doesn’t change much – but it’s worth noting the difference, or drawings can behave in a confusing manner.

Once you have a coordinate system, a polygon can be specified as a list of coordinate points: one for every vertex. This is a list of 2-tuples in Python, which looks very similar to mathematical notation. For example, a rectangle:

In Pillow, an image is represented by an instance of the Image class. We can draw shapes on the image using the ImageDraw module, passing it a list of coordinate points. For example, to draw this rectangle on a blank canvas:

We can call this draw(im) function as many times as we like. So if we had an iterable that gave us coordinates, we could draw multiple shapes on the canvas:

So now we need to write some code that provides us with these coordinates.

Because a square corresponds so neatly to the coordinate system, it’s a good place to start. Let’s start by thinking about a single point (x, y): suppose this is the top left-hand corner of a unit square, and then we can write down the other three vertices of the square: 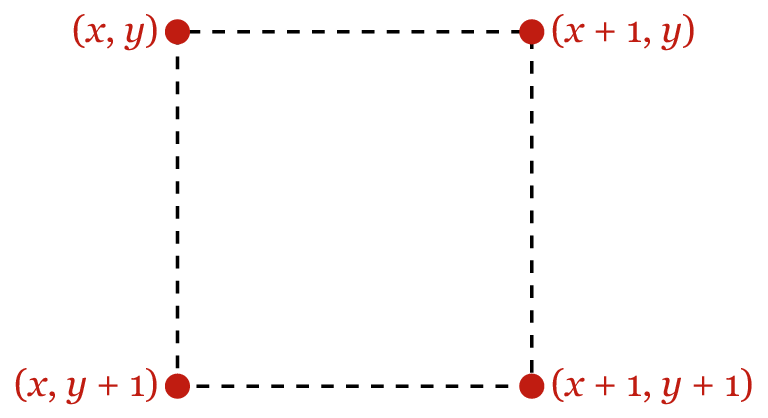 We can get these points (x, y) by iterating over the integer coordinates of the canvas, like so:

I’m using yield to make this function into a generator. This allows me to efficiently compute all the coordinates required, even when I have many shapes. Iteration is a very powerful feature in Python, and if you’re not familiar with it, I recommend this old PyCon talk as a good introduction.

To create bigger squares, we scale the coordinates in both directions:

If we drop this generator into the code in the previous section, we get a nice tiling of black and white squares: 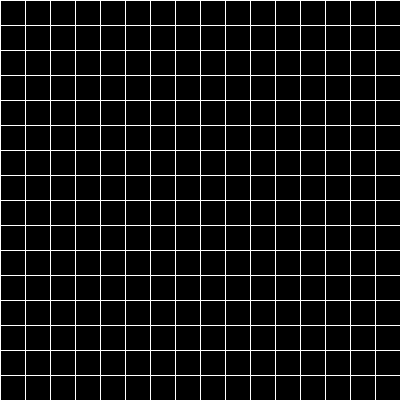 Not very colourful, but it illustrates the point. Onwards!

Unlike squares or hexagons, you can’t tile the plane with triangles without varying the orientation: half your triangles have to be flipped vertically to fill in the gaps. So to simplify the problem, let’s start by gluing two triangles together, to give us a rhombus shape:

If we can tile the plane with these rhombuses (which all have the same orientation), then we’ll have the coordinates of our triangles.

We can take the same approach we did with the square: suppose a point (x, y) is the upper left-hand corner of our shape, and write down the remaining coordinates. I’ve drawn this above for a rhombus with sides of length 1. Here h is the height of the rhombus, which is sin(60°).

With this in hand, we have enough to start writing a second generator:

The problem with this code is that the triangles it generates are the same on each row, so the edges don’t line up nicely. Here’s what that looks like:

What we need to do is add a horizontal offset on every other row. By shifting all the triangles along by a half unit, we can get them to line up nicely. Like so:

Finally, to create bigger triangles, we add a scaling factor:

Notice that this is very similar for our code for scaling the square grid, so let’s pull that out into a common function:

And voila, a triangle party:

Only one left to go.

Let’s repeat the same approach as we used for the square and the triangle: pick a point (x, y), and write down the coordinates of the other points. This is what it looks like for a unit hexagon:

Note that h has the same value as in the previous section – sin(60°) – so the whole hexagon’s height is 2h.

Now we need to think about where to put the (x, y).

If you look at each row, the individual hexagons are offset by 3 horizontal units: that’s to leave a gap for the hexagon on the next row. Here are two hexagons from the same row, with one hexagon from the next row:

This is a bit fiddlier, but comes out like so:

And with our scaling function, we can easily extend this to draw hexagons of arbitrary size:

Which this gives us the honeycomb:

And that’s the final tiling of the plane.

Putting it all together

In this post, we’ve seen the three regular tilings of the coordinate plane, and how to generate them with Pillow. If you’d like to get all the code I’ve written in this post, you can download a single file that contains everything. I didn’t set out to draw regular tilings: this became the stepping stone to a larger project, but I’ll write about that separately.

As a sidebar, it’s been nice to do a bit of maths again. Admittedly, plane geometry isn’t particularly taxing for me, but I’m starting to stretch those muscles again. When I left university two years ago, I was a bit burnt out on maths, and I haven’t done any for a while. I’m looking forward to doing more of it in the near future. Watch this space!