A Martian plaque for a made-up plot

When NASA landed on the Moon in the 1960s and 1970s, they made commemorative plaques for the lunar landers. Those plaques are still on the Moon – when the astronauts returned to Earth, the descent stage of their lunar module got left behind, and with it the plaques.

The plaques include images of the Earth’s surface, a date, and the signatures of the astronauts on each mission. For example, this is the plaque from Apollo 11: 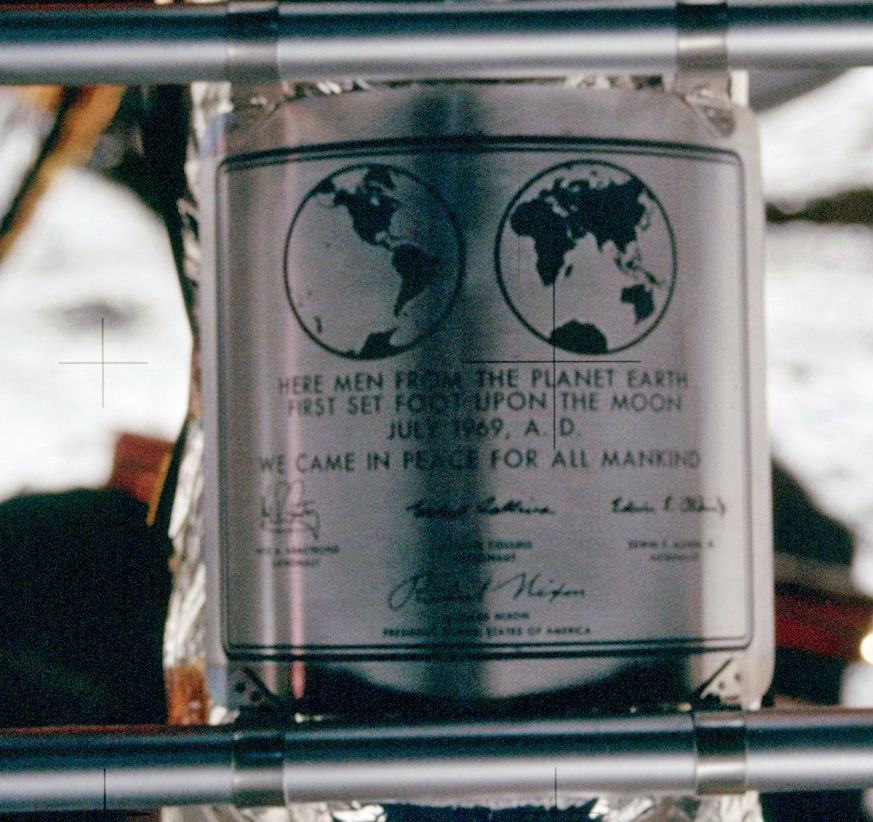 The inscription reads “Here men from the planet Earth first set foot upon the Moon. July 1969, A. D. We came in peace for all mankind.”

That gives the title to the TV show For All Mankind, which depicts an alternative history of the space race. The Soviet Union beats NASA to the Moon, with a cosmonaut landing weeks before Neil Armstrong and Buzz Aldrin. The plaque is removed from Apollo 11 before launch, and ends up decorating a child’s bedroom.

In this timeline, the space race never ends. America continues to fly Apollo missions long after Apollo 17, and space exploration gets a seriously accelerated timetable – including permanent Moon bases, nuclear rockets, and space tourism. It also leads to advances in social equality, including women astronauts much earlier than reality, and the passing of the Equal Rights Amendment.

By the third season, trips to the Moon have become routine. NASA and the Soviet Union turn their eyes to a bigger prize: the first crewed mission to Mars. It becomes a three-way race, with a private company joining the competition.

After watching s03e05 “Seven Minutes of Terror”, I found myself wondering: would the NASA of this timeline create a commemorative plaque for their first Mars landing? And if so, what would it look like? I had some fun sketching it out: 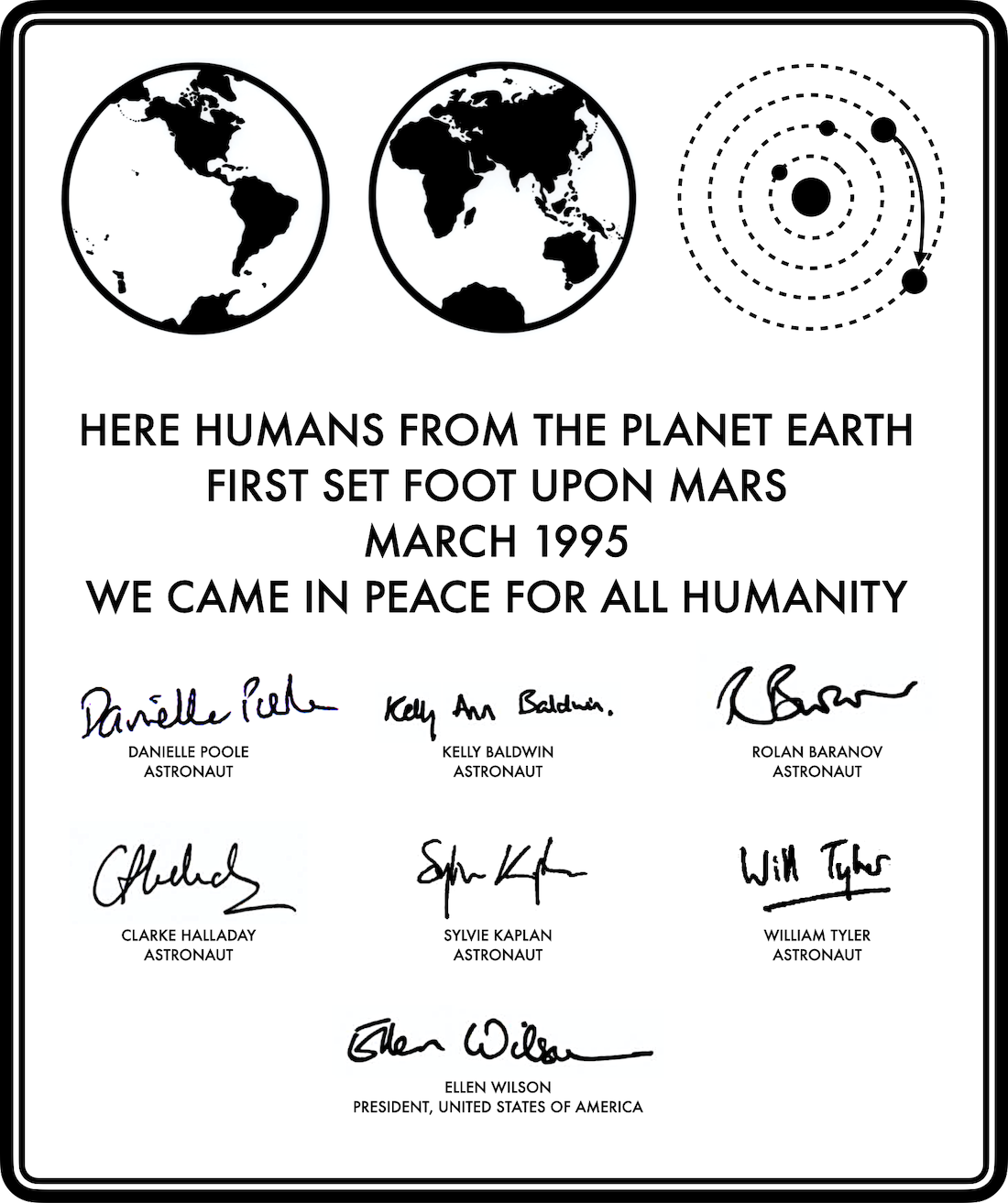 I started with two pictures of the Earth, copied from the Apollo 15 plaque. I added a simple diagram of planetary orbits, because I thought they might want to emphasise how far they’d travelled. On the Moon, the meaning of the hemispheres is obvious – they match the blue-green marble that looms large in the sky. On Mars, it’s less obvious, so I thought an illustration would be helpful.

The planetary orbits are roughly based on the position of the planets in September 1994, which is the date of one of the Mars “launch windows”. (According to an article from 1990 about upcoming Soviet Mars missions, including one called Mars 1994.) The orbits are circular and evenly spaced, which is a simplification but I think it’s still obvious what it means.

Then I tweaked the wording from the Apollo 11 plaque. Given that half the crew of NASA’s first Mars mission are women, as are the American President (Ellen) and the Director of JSC (Margo), references to “men” and “mankind” had to go. I think they’d want to express a similar sentiment, but with more inclusive wording.

(Even in our timeline, NASA now recommends using “crewed” instead of “manned” to describe spaceflight that involves people.)

The date is a total guess. The three fictional missions launched in 1994, but we don't how long they took to get to Mars.

Edit: I realised after posting that I can make an educated guess about when they land. If their Mars launch windows are the same as in reality, they launched sometime in September 1994. They also had advanced propulsion techniques, including nuclear engines and solar sails, and in season 2 we hear that the engines will take “100 days off the trip”. Recent missions have taken between six to ten months from launch to orbital insertion. Let’s assume their advanced propulsion puts them on the fast side of that, and March 1995 seems plausible.

The names come from the credits of s05e04. I wrote the signatures myself with an ink pen, then I digitised them with my scanner. I tweaked the contrast and sharpness to make them look more like solid black lines, and to remove the paper texture from the scan. A handwriting expert could probably tell I wrote all of them, but they look different enough for me to be happy.

I thought of the plaques because I was imagining what Dani would do with hers. She won the race, and she has every right to place it on Mars – but two of her redshirts crew were killed on the journey, and she picked up several Soviet stragglers too. I wonder if she’d put up the plaque for the original mission, or if she’d arrange for a new plaque to reflect the crew that actually landed.

I don’t expect the show to answer the question (I suspect the Mars colonists have much bigger problems ahead), but I had fun imagining this little corner of its universe.