Python and the BBC micro:bit

The BBC micro:bit is a tiny computer, intended for Year 7 students to use to learn about programming (being distributed free to schools next spring). It’s the spiritual successor to the BBC Micro. Here’s a picture from the BBC’s website; it’s about half the size of a credit card: 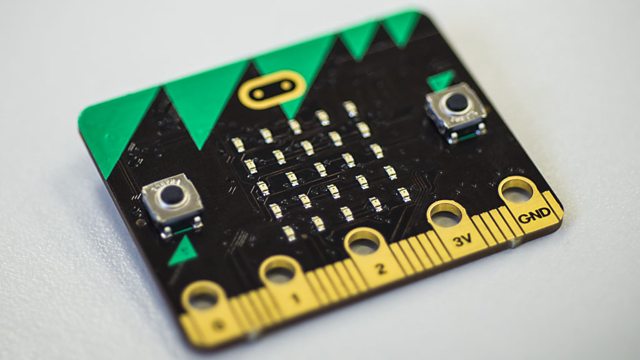 One of the main programming languages on the micro:bit is Python, or rather MicroPython, a version of Python 3 that’s optimised for microcontrollers. (The micro:bit has just 16K of RAM, so full Python is out of the question.) I got to play with a micro:bit at tonight’s meeting of the Cambridge Python User Group, and it’s a delightful piece of engineering.

For about an hour, we got to play with it – making the lights flash, trying the buttons, even playing music – and it’s just fun. Although there are only a handful of hardware features, there’s a lot of scope for ideas – there were at least a dozen different ideas that came up tonight. I particularly liked a mini-version of Snake and Pong played on the 5-by-5 screen, and some visualisations that played with the intensity of the LEDs.

There is something incredibly visceral about programming that enters the real world, having an effect beyond just text on a screen.

The software is equally remarkable. It has a very robust, stable REPL built on MicroPython, and it works very well. Inevitably, this isn’t a complete implementation of Python 3 – 256K of storage puts a stop to that – but what it has seems very well done. This isn’t a dumbed-down or toy language. It’s proper Python, just with a smaller standard library. I didn’t have to think about it at all – I just used it like I would on any other computer.

I don’t expect that everybody who uses this device will magically become a software developer, but I hope they have fun playing with it.

Thanks to Nicholas Tollervey for bringing the micro:bits for us to play with.

If you want to play with a micro:bit yourself, you should follow the python-uk mailing list. There are going to be a handful more meetups/events with micro:bits before they all return to the BBC. I’d highly recommend going if you have the chance!