I really like Pygments. It’s a Python module for applying syntax highlighting to code in printed documents. I use it on this blog, and when I had to include code listings in my university coursework, I used it with the Minted package in LaTeKLaTeX.

But recently I’ve needed to generate standalone code listings that aren’t part of a larger document. I was using the command-line each time, but to make it a little easier, I’ve written a small web app instead. Here’s a screenshot: 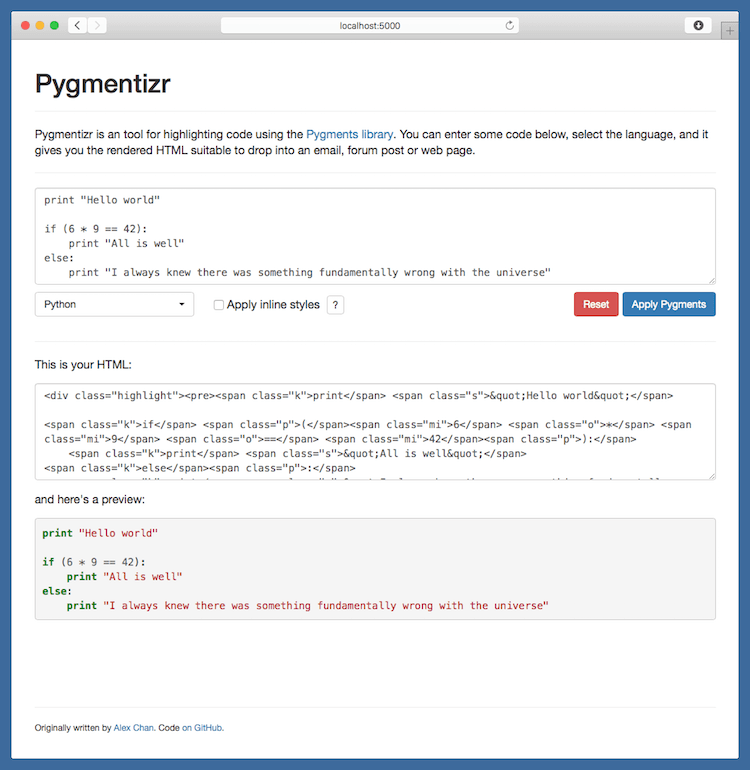 I enter the code in the first box, select the language, and click the button. The HTML and rendered preview appear at the bottom of the page. Really simple.

The code is all on GitHub, and below I’ll explain why I wrote it.

The script is nothing special. It’s just a tweaked wrapper around the first three entries of Miguel Grinberg’s excellent Flask Mega-Tutorial. I’m also using Bootstrap, and there’s a meta discussion here about how I’m embracing more third party libraries like this – but that’s a discussion for another time.

Thing is, there’s already a Pygments demo which is quite similar to this. So why did I write my own?

None of which is to say that the demo is bad - it’s just not suited to my purposes. It’s not surprising that a custom tool fits my needs better.

For all that programmers argue about text editors, we all seem to agree that syntax highlighting is a good thing. The colours highlight the structure of the code, which makes it much easier to skim and read. I’m hoping this tool lets me use it in a few more places.